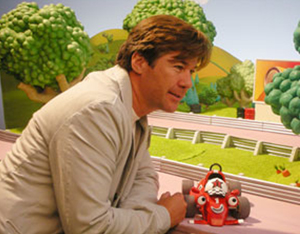 eko have been working down in Basildon in Essex for surestart and Essex Council. We have been filming children’s centre’s for a promotional DVD due out in september. We also filmed Keith Chapman the creator of Bob the builder, Fifi & the flower tots, and Roary the Racing car who also wanted to be involved. Keith was brought up in West Basildon and opened the All about centre in 2005 where we have been filming for the past week. We will post the film on the site when completed.